A wild form of the vegetable Chicory, the electric blue flowers are produced on many slender stems throughout the summer months. A beautiful addition to the cottage garden border. Young leaves and flowers can be used in salads. Primarily grown in North America as an ornamental, the roots of this plant have been used for centuries in Europe to brew a beverage similar to coffee. For this purpose, its roots are harvested, washed, cut into chunks, dried, and then roasted. It is then ground and used as either a coffee amendment or a substitute. Interestingly, the process of roasting converts one of its many compounds (e.g. inulin) into oxy methyl furfurol, which gives the beverage brewed from it a coffee-like aroma.

Sowing: Sow directly 3mm deep in well-prepared soil which has been raked to a fine tilth. Sow in drills 30cm apart. Water regularly, thin seedlings when large enough to handle to 30cm spacing. Can be sown in Aug-Sep. for flowering the following year.

Be the first to review “Cichorium intybus” Cancel reply 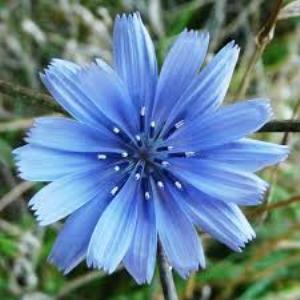