A very large, fast-growing, and unusual-looking conifer originally native to China, Vietnam, Laos, and perhaps Cambodia but now widely grown as an ornamental in Japan, China, and elsewhere. With its rather long, sickle-shaped, needlelike, green or bluish leaves on snaking or drooping branches, it reminds one of an Araucaria, even though it is, in fact, a primitive member of the Taxodiaceae or Cupressaceae and thus related to trees like the giant Sequoia or bald cypress. Its durable and aromatic wood is much used for construction, especially in China. In cultivation, it is suited for temperate climates in USDA Zones 6 to 9. In Zone 6 it is considered marginal.

Pre-sowing Treatment: Soak the seeds for 24 hours. Sowing Instructions: Sow at any time of the year. Mix equal parts of seed compost with vermiculite or perlite, water, and leave to drain. Sow seeds very thinly on the surface, then just cover them with a layer of vermiculite, perlite, or sieved compost. Seal inside a polythene bag and place in the fridge for 4 weeks. Move to a propagator or other warm place and maintain an optimum temperature of 15-21C. Germination should take place in 3-6 weeks. Note: Germination can be very erratic, so sow thinly and prick out the seedlings as they become large enough to handle disturbing the rest of the compost as little as possible. An alternative method is to sow in pots as above during late summer to early winter then place in a cold frame and let nature take its course as the seasons change with the seedlings emerging the next spring. Growing Instructions: Transplant seedlings when large enough to handle into 7.5cm pots and grow on in a cold frame or nursery bed for a year or two then plant in their final position in sun or semi-shade.

Be the first to review “Cunninghamia lanceolata” Cancel reply 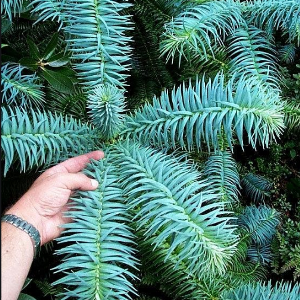