Hardy kiwi, the perennial deciduous vine of the family Actinidiaceae. Common names for the plant include kiwi berry, grape kiwi, northern kiwi, cocktail kiwi, grape kiwi, dessert kiwi, and arctic kiwi. Actinidia arguta is originally from Korea, Japan, Far East Russia, and Northern China. Actinidia arguta grows up to 15 m. The fruit is emerald green, grape-sized and contains black seeds. The fruits are not only edible and sweet but also rich in vitamin C which makes them highly nutritious. The edibility extends to the skin and the seeds as well. Korean people are fond of the young leaves of Actinidia arguta which they cook as a vegetable. The vine grows best in fertile, moist, and well-drained soils. The ideal pH of the soils is slightly acidic. While it’s possible for the vine to grow in neutral soils, doing so could lead to a nitrogen deficiency when the soil becomes alkaline. Actinidia arguta requires plenty of water during the summer which might force you to consider irrigation. The plant takes 150 days to grow and reach maturity. This variety was bred to sustain frosts under -30°C (USDA zone 4). 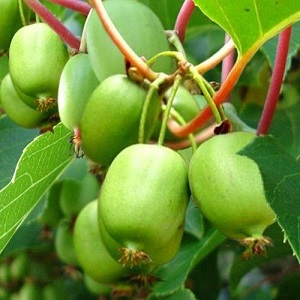